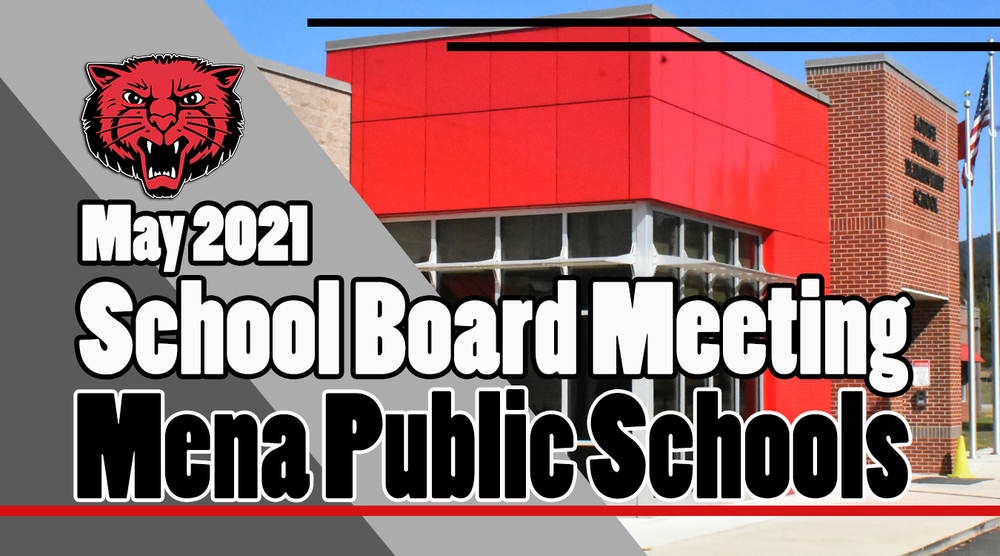 May School Board Meeting !

The May meeting of the Mena School Board was held on Tuesday, May 18th at the District Administration Building.

The Meeting began with a plaque presentation to Mr. Benny Weston in appreciation for his nine years of service to the Mena School District as Superintendent. Mr. Weston will be taking a new position at the DeQueen Mena Education Service Cooperative.

In the Superintendent’s Report Mr. Weston recapped recent activities & talked about the completion of a trying year. He expressed his appreciation to the parents, students & staff for rising to the challenge.

Weston reminded school board members that at the June meeting they will need to reorganize the board. The school board elections were held on Tuesday & state law says that the board must reorganize at the next meeting following that election.

Mena High School Principal Mr. David Maxwell then updated the board on the graduation ceremony that will be Saturday, May 22nd at 10:00am in Bob Carver Bearcat Stadium. The event will follow the same format as last year. Gates will open at 8:45am.

Campus principals addressed the board about the summer school schedule. Sixty students are expected at Holly Harshman Elementary & Fifty Six students will attend at Louise Durham Elementary. These will be in July on Tuesday & Thursday from 8:30am-11:30am.

Mena Middle School will not have summer school & will focus on interventionist & other staff training. Mena High School will host two recovery sessions this summer. The first is June 7th-24th & the second is July 12th-29th. An ACT Boot Camp will be held July 12th-16th. Self  contained students at MHS will have sessions from 8:00am-Noon June 14th-17th, June 28th-July 1st, July 12th-15th & July 26th-29th. Buses will be running & transportation will be provided.

Mr. Danny Minton presented a maintenance report. It included an update on the completion of the gym floor project at the Union Bank Center & a new finish on the floor at Jim Rackley Gymnasium. New fencing on a portion of Bob Carver Bearcat Stadium is planned in June. He updated the plan for new HVAC at HHE & MMS as well as the summer maintenance program.

As announced earlier on social media Louise Durham Elementary has earned accreditation as a highly effective school from Solution Tree. Mr. Weston congratulated Mrs. Holder & the staff on this impressive accomplishment. LDE joins eight other schools in Arkansas to earn this designation.

Next on the agenda was the food service renewal. The board voted to  extend the 5 year contract with Aramark.

The board also voted to renew the contract with Horizon for software used in the cafeteria as well as rollover & direct certification import..

Mr. Weston then asked the boards permission for the district to acquire new busses when they become available & avoid the need for a future vote. That request was approved.

Assistant Superintendent Dr. Lee Smith then spoke to the board on the Chromebook lease. Smith recommended a buyout of current Chromebooks & a new set for 5th grade & 9th grade. That plan was approved.

Dr. Smith then shared information on E-Rate. E-Rate is a government program the district can take advantage of for improvements to the network infrastructure. That would total $250,490.00 with the balance of $67,484 being paid with ESSER funds. The board approved.

Mr. Weston then gave an update on the ESA Percentage for 2021-2022.This is also known as school poverty funding & is a part of the state funding package for schools that is targeted to low income students. The number of students eligible for free & reduced price lunches is used to set the funding level for each district. The current rate In the Mena district is 69%. That is one percentage point away from doubling the funding for these programs. Weston expressed his disappointment with coming so close to that mark.

The five year plan was next on the agenda. That included a discussion on ESSER II, equalization & educator compensation funds. Recent legislation allows reform of the salary scale including a minimum salary increase. The board approved Weston’s suggestion to accept the educator compensation reform fund dollars from the state & fix the minimum salary scale. Approving this now will allow the district to take advantage of additional funding next year.

The board also approved the submission of a plan to award ESSER II funds for extra effort by school employees for on sight days. The plan will be submitted to the state for approval.

With the reform of the salary scale the district salary schedule for certified employees was reduced to two columns, bachelors & masters.

It includes adding an increase to meet state minimums, add a Dean of Students multiplier & the Assistant Superintendent multiplier will go back to .3317. This will go into effect on July 1st, 2021. The board approved that change.

Changes to the classified scale were also approved. That includes a 2.4% increase for job positions not effected by the minimum wage increase over the last two years.

Next the board approved changes to the Visa card accounts to reflect recent changes in personnel & consolidate those into one account.

The board then voted to accept 11 freedom of choice students who applied for the 2021-2022 school year.

The final item on the agenda was personnel.

The retirement of Martha Billingsley & Kellie Sterner were accepted.

They accepted the resignation of

Resigning from coaching assignments were

Those affected by restructuring include

Karen Parnell to MMS Self Contained

Changes in athletics will include