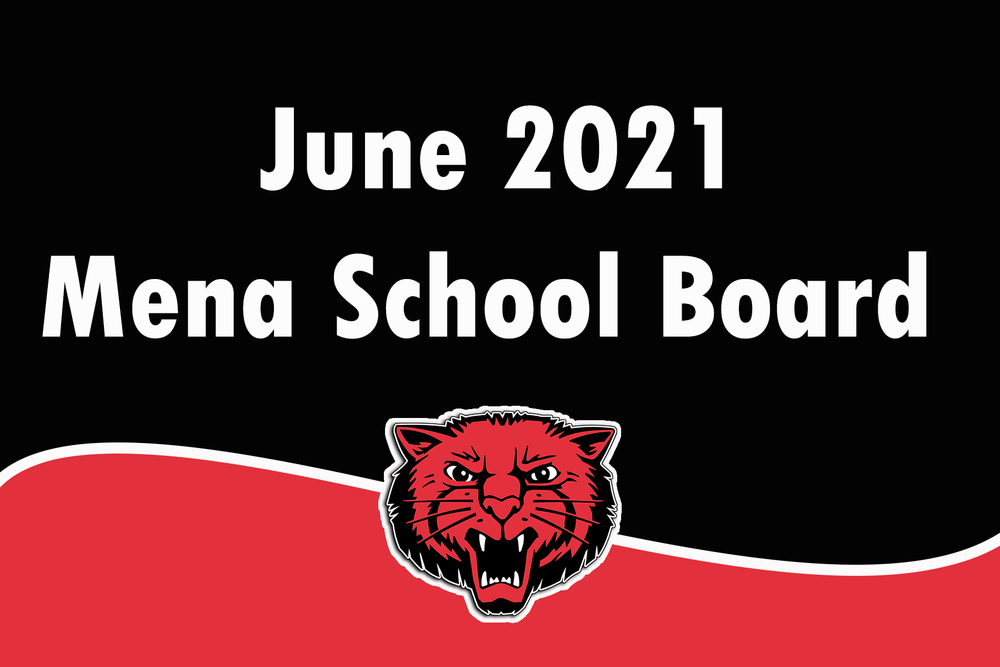 The Mena School Board met for their regular June meeting on Tuesday at the district administration building.

Assistant Superintendent Dr. Lee Smith led the meeting in the
absence of Mr. Benny Weston and presented the
superintendent’s report. He said that parents can expect a
survey in the near future concerning the loss of learning during
the pandemic. These are a part of the consultations required by
the federal government for the allocation of ARP ESSER 3 funds.
Smith also let the board know that the waivers for board
meetings during the pandemic came to an end on April 30 th . He
is anticipating the return of pre COVID procedures when classes
resume on August 16 th .

Next on the agenda was the reorganization and election of
board officers. After a brief discussion the board elected to
leave the current officers in place for another cycle. Later in the
meeting they also chose to leave committee assignments the
same as well.

The board was then asked to approve a transfer to the building
fund. Act 1105 of 2017 requires the district to transfer any
amount over 20% of total revenue to the building fund. A
transfer of excess revenues above an ending balance of
$2,600,000.00 was approved.

Mr. Danny Minton then addressed the board and presented a
facilities report. At Louise Durham Elementary floors are being
stripped and waxed. Some painting is taking place and he also
informed the board of bids received for the replacement of the
steamer in the cafeteria. The board approved the low bid. At
Holly Harshman Elementary new warming tables have been
installed in the cafeteria, there has been some painting and of
course the floors are getting refurbished. At Mena Middle
School the unused lockers have been removed, some partitions
are being rebuilt and painted. At Mena High School there is
painting and floor work being done as well. New water heaters
have been installed in the cafeteria and Minton passed along
bids received for the installation of shot clocks at the Union
Bank Center. The low bid was approved. It will include all
hardware and software needed for the installation and
operation. The Arkansas Activities Association has ruled that a
shot clock will be used in basketball and implemented in all
classifications at the start of the 22/23 season.

Dr. Smith then informed the board of a $10,000.00 increase in
the premium for the district’s building and property insurance
caused by an increase of replacement and operational
expenses of the insurance agency. The board voted to approve
the renewal of that policy as well as the supplemental student
accident insurance policy.

Smith then spoke briefly on the district’s policy to align with
emergency COVID-19 legislation and the cancellation of special
waivers for the instructional day.

Next on the agenda was the annual disclosure statement. The
board voted to renew its contract with the Union Bank of Mena
as its primary banking partner.

Dr. Smith shared information on new core literature curriculum
for grades K-5. A committee reviewed several options and
suggested Benchmark Workshop Curriculum. This suggestion
was approved. It will be paid for with ESSER funds and will be in
use for six years.

Mr. Benny Weston had expressed an interest in purchasing the
vehicle that the district provided him in his position as
superintendent. The board approved the sale at fair market
value.

Incoming assistant superintendent Bridget Buckley then read a
proclamation concerning the instructional time waiver
extension for the alternative education program. It was
approved.

Next on the agenda was the purchase of three used busses at a
cost of $21,000.00. That purchase was approved.

The board then corrected an oversight from a previous meeting
concerning the length of the contract for the new
superintendent. The board approved a two year contract.

As always the final item on the agenda concerned personnel.
The board accepted the retirement of bus driver Rose Branch
and the resignation of Para Professional Jackie Baird. New hires
included:

The board meets on the third Tuesday of every month.