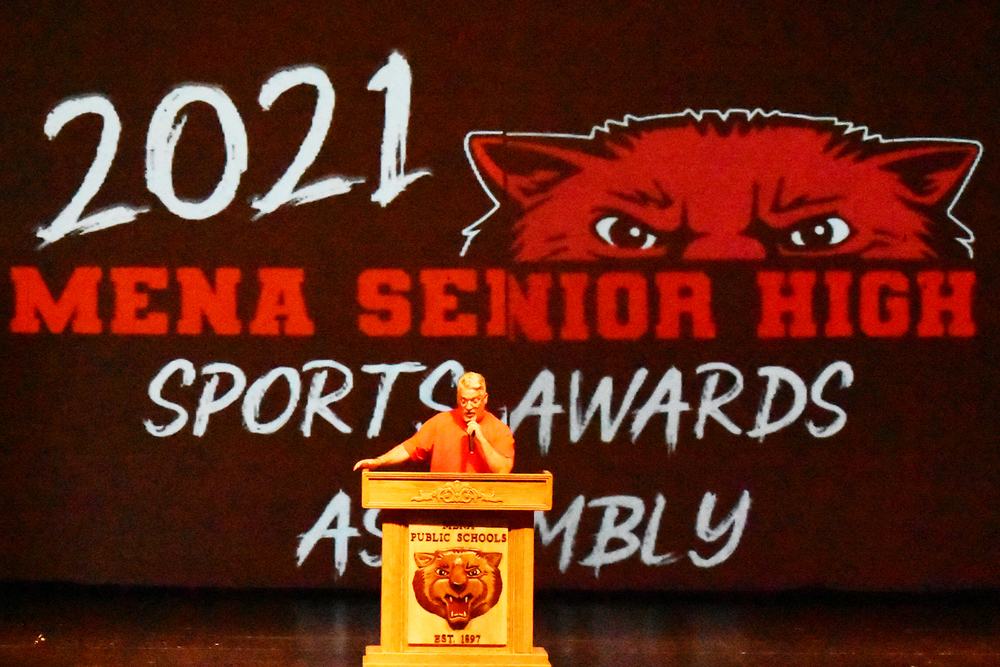 The Mena XC Teams competed very well this season. They finished 2nd overall in the 7-4A conference and 9th overall in the Boys Arkansas State Championships.

Logan Myers led the team with a 1st place finish in the Conference race, 3rd place finish in state, River Valley All Star Gold Medalist honors, and a full scholarship to run XC and Track for UARM.

The boys and girls golf team this year competed in several matches and did a good job of representing the high school. They competed well and had a lot of fun as a group.

This years Seniors include:

Coach Hunter Said “ I will really miss seeing them next year. Especially because one of them is my son.”

The Mena Ladycats had another amazing volleyball season in 2020.  They finished with an overall record of 19-3, were co-conference champions, and advanced to the semi finals of the state tournament where they lost in 5 sets to Valley View, the eventual state champion.  They finished the season ranked #3 in 4A according to MaxPreps and #10 overall in the state of Arkansas.  What a great season for the Ladycats!

All State All Tournament Team -

The cheerleaders had a slow start to the year and did not get to compete early on in the season, perform at pep rallies, or travel. The team competed at the Arkansas State Cheer Competition in December and moved up several places in ranks compared to last year. Although the season didn't go as hoped, it was a great year with lots of growth and the team is looking forward to the future.

Blake Castor was awarded a scholarship to SAU.

The 2020 Mena Bearcat football team was able to persevere through a tough non conference schedule to finish their conference season undefeated, which led to the first football conference championship in 24 years. The 4-4A champion Bearcats also were able to host a home playoff game to conclude their season. Thank you Bearcats for an unforgettable season and you will ALWAYS be remembered as Champions.

The following awards were voted on exclusively by members of the 2020 football team.

Defensive Player of the Year:

Bearcat basketball worked very hard this season with a very young group. The team battled for a top 4 spot in the conference and a trip to the regional tournament but unfortunately fell short at the end of post season play.

Offensive Player of the Year

Defensive Player of the Year

The 2020-2021 Ladycat Basketball season was full of excitement, and drama.  Led by an outstanding senior class the team won several close games, overcame a lot of obstacles, and had one of the most successful seasons in quite some time.  Finishing with a record of 22-4, the Ladycats won their 1st conference championship since 1996 and their first district championship since 2001.  As the South Region runner-up, the Ladycats played in the State Tournament for the 2nd year in a row.

7-4A girls conference coach of the year:

Teammate Award:  (Voted on by the team)

Mena track had a successful season with many individual highlights throughout the year:

Logan Myers will continue his track/cross country career at University of Arkansas Rich Mountain next year.

Bearcat soccer battled through a tough season but ended on a few strong performances including a shootout win over Morrilton and a conference playoff game against DeQueen.

The Ladycat soccer team competed in 12 games this season for a record of 5-5-2. They started off very strong with a non conference record of 4-1. When various injuries began to plague the team in conference play, they exemplified incredible mental toughness to enter the conference tournament as a 3 seed. Unfortunately, they fell just short of making an appearance at State, but did not fall short of making an impression on the teams they played.

As voted on by the team:

The Mena Bearcat Baseball had some early adversity to overcome along with some key injuries. A couple of highlights for the season: Winning the Mena Baseball Tournament: losing to Waldron in the first game, the team bounced back to defeat both Mt Ida and Mansfield and take the tournament win. The Bearcats were victorious on both Senior Night and the Final game of the season.  Playing in a tough competitive double round robin of league play, the Bearcats lost all 7 games the first way through but won 2 games and played everyone much closer as they led late in ballgames vs eventual Conference Champion Bauxite and vs #1 ranked Nashville. Although we lost those games we competed very well and started to learn the game of baseball.

Bearcat Baseball will continue to get better!

Defensive Player of the Year-

Offensive Player of the Year and Team MVP-

Ladycat Softball finished  9-13 on the season. They Tied for 4th place in their tough,competitive district….. Because of tie breakers and the fact that there was no district tournament this season, They did not qualify for the Regional tournament, but they continued to improve throughout the season and were able to finish their season with a win in their final game. The future of Ladycat softball is bright!

Junior Logan Yang attended the state weight meet this year in Lake Hamilton where he competed against his peers in classifications ranging from 2A-7A. Logan won his weight class and overall in both Bench Press and Power Clean.

The Bearcat Foundation continues to pursue  goals of partnering with the Mena Public Schools with assistance in areas of equipment, facilities and supplies. Thanks to the generous members and supporters, since 2007, BFI has gifted over $465,000 to the Mena Schools . A very important part of their mission is to provide a scholarship for graduates of Mena High School, and today, they are happy to present the BFI scholarship for the 10th year.

The Foundation scholarship differs from others in that it is scored and judged on a blind basis. All applicant’s names, family names, and commonly identifiable accomplishments are omitted from the application once received in an effort to eliminate any possible bias in the scoring process. The applicants are scored based:

The committee is anonymous and does not consist of any foundation board members. All scoring is done separately by each member of the committee. The scholarship is $2,000 per student.

This year’s winners of the Bearcat Foundation Scholarship for 2021 are:

The LadyC.A.T.S award is an award given to a Ladycat athlete who has displayed  exceptional perseverance and dedication, and demonstrated the key characteristics of the LadyC.A.T.S. award: Character, Attitude, Toughness and Success.

This is an award not necessarily given every year, but only when a Ladycat shows tremendous attributes described by this award.

The Orville McMellon award is periodically given to a Bearcat athlete who has displayed courage and determination while overcoming adversity. This year’s winner is no stranger to adversity. In the final game of his sophomore year, he was injured which required major knee surgery. After battling through a tough recovery, he was off to a hot start as one of the statistical leaders in the state for his position when, unfortunately, injury struck again causing him to miss the majority of his Junior season. Coming into his senior season, after many hours of hard work and rehabilitation, he was able to complete his Senior year and help lead his team to a conference championship as one of the best quarterbacks in the state.

The Frank Mosley Outstanding Girl Athlete and the James C Copher Outstanding Boy athlete are longstanding awards given to our most outstanding and deserving Senior boy and girl athlete. These athletes must be involved in multiple sports and display great character in the sport, their school and the community. The awards are voted on by the head coaches from each sport, the athletic director, the assistant athletic director, high school principal and a Mena High School Staff Member. This impact that this year’s winners have had on Mena athletics will be felt for many years to come.

This year’s James C Copher award winner participated in multiple sports at a high level during his Senior Year. He was awarded All Conference in football, basketball, and baseball. He was a member of the competition cheer team. He is also the student council president and is a member of JAG, East, and Journalism.

This year’s Frank Mosley award winner excelled in both Volleyball and Basketball where she was awarded All State in both. She was also selected to be a member of the Arkansas Activities Association All Star Volleyball team. She is a member of Yearbook, NHS and JAG.