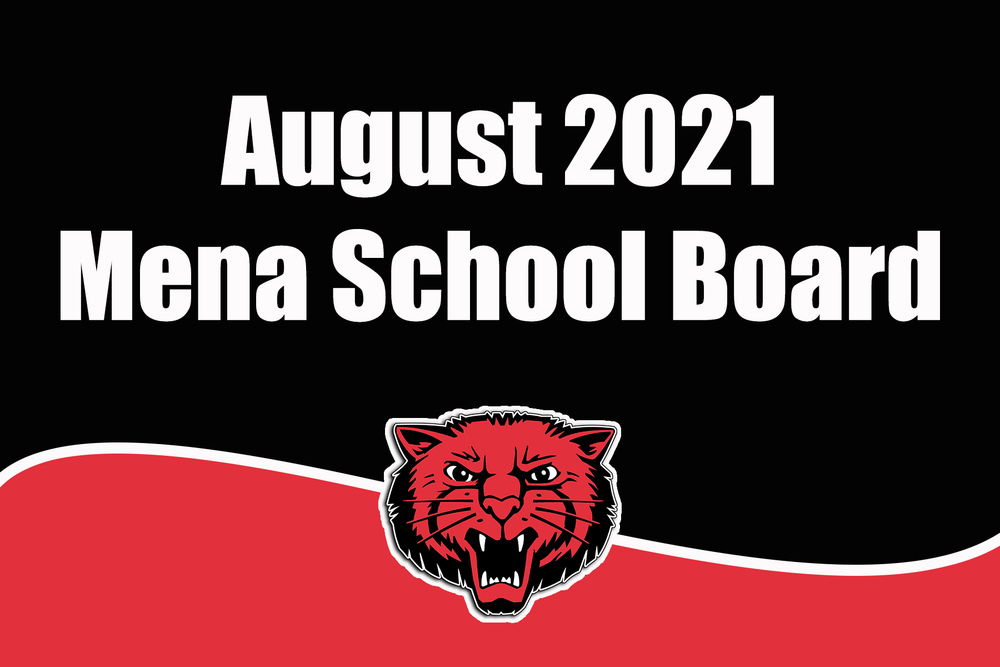 Board Approves Ready for Learning Plan !

The Mena School Board met for their August
meeting on Thursday evening in the Mena High
School Library with many district patrons in
attendance.

The first item addressed was the district ready for
learning plan. Superintendent Dr. Lee Smith
recommended no changes at this time. In person
and the Polk County Virtual Academy will remain
the two learning options for students. This also
means that the mask policy will remain as it was
amended on April 13th and the wearing of masks
will be optional for students and school
employees but is still highly recommended by
the board.

Next on the agenda was the approval of changes
to the school handbooks for each campus. Those
changes were presented by administrators from
each school. The LDE, HHE and PCVA handbooks
were approved with minor changes. The main
change at Mena Middle School was the cell

phone policy and Mena High School had the
most changes. They included some curriculum
changes as well as several items that were
required due to changes at the state level. The
updated handbooks will be posted on the district
website soon. Be watching social media for info
on when that happens.

Minor changes in the athletic handbook and the
athletic administration guidebook were also
approved after a brief discussion.

Next Assistant Superintendent Bridget Buckley
presented the board with information on the
district’s “American Rescue Plan”. This details
how the district intends to distribute
Elementary and Secondary School
Emergency Relief (ESSER) funds. The ARP
Plan was approved as presented.

Harshman and Mena Middle Schools. The
low bid by Wilson Heating and Air for
$635,000 was approved. These upgrades are
a major part of the district’s plan to slow the
spread of COVID among students and staff.
It will be paid for with ESSER II federal funds
and will increase fresh air exchange in the
two buildings at a rate ten times higher than
the current systems. Louise Durham
Elementary and Mena High School currently
have this technology installed.

Dr. Smith then updated the board on the
status of bids on several CD’s held by the
district. The board gave the administration
the liberty to accept the highest rate offered
once all have been received.

The board next discussed a bid from
Southern Disposal for use of an indoor
practice facility. Dr. Smith spoke briefly on
his negotiations and the board agreed to

pay $1400.00 a month for unlimited use of
the facility with no long term contract.
A number of changes in personnel were
brought before the board including the
resignation of Catlynn Haynes and Casey
Adams. The transfer of Samantha Breedlove
from MMS to Mena High School. The hiring
of Linda Willard, Ashley Pregon, Grace
Minton and Alexa Brewer. Dr. Smith
recommended that Tommy Johnson be
officially added to the high school football
staff and that Tim Walston’s contract be
extended to 12 months. All actions were
approved.